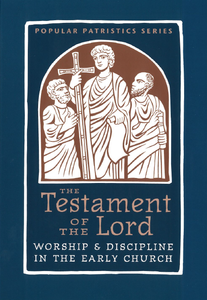 I am happy to say that my version, with a fairly extensive introduction, of Testamentum Domini, has now been published by St Vladimir’s Seminary Press.  Get yours here.

As a taster, here is the forematter:

The work presented here was first suggested to me by Fr John Behr in 1999, but not started until 2007, after he had reminded me of his request. For a number of years, however, it was abandoned as other projects took precedence, and I despaired of my own ability to complete it. Nonetheless, an invitation from Codrington College to lecture on apocalyptic in the patristic period led to the publication of an article on the apocalyptic section of the Testament. Work restarted in earnest in 2015, at Fr John’s suggestion that I take it up again. Not for the first time I have cause to thank Fr John and all at St Vladimir’s Seminary Press for their confidence in me and for their patience.

In essence this is a translation of the Syriac text published by Rahmani in 1899, though on occasion I have understood this text differently from previous translators. Moreover, on occasion I have ventured a conjecture, and have had an eye to the Ethiopic version, and to such portions of other texts as have been published. As I note in the introduction, this falls short of what is really required, given the complexity of the textual transmission of the work and the extent to which it has been neglected, but if this serves in any way to re-ignite the interest of specialists then that is is good. The Arabic witnesses in particular need proper investigation.

My primary aim, however, is to make the work better known and readily accessible to a wide readership. Thus although the footnotes may refer to abstruse matters and to recondite secondary literature, the text can be read without reference to them, as can the introduction.

This introduction is intended to show the importance of this neglected work for liturgical history, beyond its value as a witness to Apostolic tradition. Moreover I hope to have established the (already suspected) fourth-century and Cappadocian provenance of the Testament; it is thus a work contemporary with the Cappadocian fathers. A Basilian outlook underlies the Testament, which is reason enough, beyond its valuable liturgical information, to read the work

William Gordon, preaching at the funeral of Christopher Codrington in 1710, noted that Codrington “was a great Admirer of the Fathers, particularly of St. Basil.” Sadly we must record that he followed Basil in accepting the necessity of slavery; however, his bequest for the foundation of a Basilian monastic community in Barbados, whilst never realized, was the basis for the College which I was privileged once to serve, and through which the learning of the fathers is kept alive in the West Indies.

For this we glorify you, we bless you, we give thanks to you Lord.